The German word in my title is commonly used; the English is the corresponding entry in Wikipedia. I do not find the English to be very common (I had certainly never heard it before), but the cursive part of the following definition is exactly what the German means:

Thought-terminating clichés are sometimes used during political discourse to enhance appeal or to shut down debate.

A White Paper has been published on feed-in tariffs (FITs), and the title says it all: “Feed-In Tariffs: Are They Right For Michigan?” As readers of my blog already know, feed-in tariffs are the mechanism used in all countries where renewables (and not just wind power) have been ramped up considerably. No country has been successful with another policy.

The only thing left for critics to argue then is that, "It may work there, but it won't work here." In recent years, there has been a lot of talk about American exceptionalism, but a closer look reveals that every country thinks it special. I'm not sure what each country calls its own sort of exceptionalism, but Germans have been debating their "special way" for some time now.

But back to the white paper -- this thing is a doozy. starting with this Todschlagargument from a "solar energy advocate in California" (Adam Browning):

There is nothing particularly magical about a feed-in tariff as a policy model. The main driver in supercharging markets is the amount of money thrown at it, not the structure of the policy instrument. If you want to replicate Germany’s growth, don’t get caught up in replicating their model. Replicate their budget.

Factually, that analysis is completely misleading. Germany does not have a budget for solar that can be replicated at all. If the price paid for the various forms of renewable energy is not right, then there is no market, so there is no budget -- if nobody invests, no "budget" money is spent. Likewise, and more importantly in the context of comparisons with countries like Spain and elsewhere, Germany has no ceiling on this alleged "budget." There is no amount of megawatts or a particular figure in millions of euros that could be reached for the policy to end. So the US consultant has completely misunderstood the nature of German policy, and the American White Paper has repeated that misunderstanding.

Think of it this way: even assuming that we simply could call the amount that Germany spent last year on solar a "budget," if we were to invest that amount in the US (or several times that amount to reflect the larger size of the US) in a system of upfront bonuses, which Americans seem to prefer, there would be little incentive at all to pay attention to proper installation and maintenance. If, for instance, you get a government bonus for 70 percent of the purchase price and your meter runs backwards after that, then the amount of electricity produced is not the main factor in the return on your investment, which is largely paid for at the outset. In the German system, you get paid a premium by the kilowatt-hour, so you get paid to make sure that there is little or no shading, that you do not install panels on the north side of the building, etc.

Essentially, what the Michigan White Paper is arguing is that it does not matter how we throw money at a problem, as long as we throw enough money at it. I find this argument very strange coming from the United States, where "just throwing money at a problem" is common criticism.

Otherwise, the White Paper is a below-average sophomoric attempt at describing the policy it criticizes. I don't really mind if people are of a different opinion, but you do have to get the facts right. When the author claims:

Germany and Spain have had huge percentage increases in solar energy
production, but solar accounts for less than 1% in both countries after 15 years of FIT subsidies.

he is revealing his ignorance of the thing he dislikes. FITs have been around for micro-hydro and wind for nearly 20 years in Germany, but it was not rolled out for solar until the spring of 2000, as you can read in English here. The author's bias is clear in such passages:

Actually, in Germany feed-in rates are determined by very experienced politicians who could run circles around the author of this White Paper. I am not saying that US politicians would not screw this up, however. Take a look at Senator Chuck Grassley's Debt and Deficit Dragon, which I cannot imagine happening in the German Bundestag.

The White Paper also argues, "In Europe, RPS policy is seen as an alternative, not a complement, to a feed-in tariff policy," but I would say that Europeans do not see RPSs (called "quota systems" here) so much as an alternative, but as ineffective.

The Michigan author is apparently concerned about the poor in the US and thinks that European renewables policy would detrimentally affect poorer Americans:

How many households are likely to finance the investment of a $30,000 solar
PV project which would provide only one third of their electricity?

It always amazes me when Americans are so concerned about how a European policy will affect the poor. I thought Europe was a place with socialist healthcare and welfare benefits that protect the poor, not a place with an impoverished underclass that cross-subsidizes feel-good investments made by the rich.

Anyway, we have "plus-energy homes" here in Freiburg (which I have also called "residential power plants"), so I am not exactly sure where the Michigan author gets the idea that 30,000 dollars of solar panels will only provide one third of your energy. But maybe Americans waste a lot of electricity.

The answer to his question about how cash-strapped American households are to fund solar roofs is quite simple: from a bank. German banks, even the smallest savings-and-loan bank in the community, are more than happy to provide financing to anyone who wants to invest in solar because of the government policy. Americans would no doubt be very pleased to have a safe way of investing their money, which they are already going to spend anyway -- even according to the White Paper's analysis, you are going to spend this money on electricity over the years, whether you are poor or not. A lot of Americans have just lost their portfolios because of the subprime crisis and would probably have preferred to have a safer investment, like solar investments that have been open to Germans since 2000.

Strangely, the Michigan author sees things exactly the other way around:

Feed-in Tariffs can very easily be like cheap mortgages. Subprime mortgage rates were encouraged by Congress to encourage home ownership for everyone.

Returning to the argument that it may be good for Germany, but it won't work in the good old US of A, the author writes: 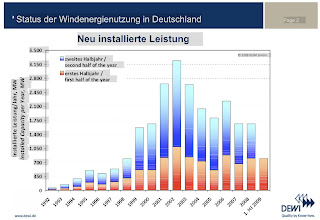 I like the part about "competitive in as much as" because the author does not bother to tell his American readers that they enjoy no such freedom. European electricity markets are much more competitive, offer consumers much more choice (you generally cannot switch power providers in the US), and even allow simple homeowners to produce their own electricity at a profit, which you cannot do in the US. In fact, in the US even communities generally have a hard time investing in their own wind projects. The US electricity market is monopolized with government guarantees of returns -- exactly the kind of thing that FITs offer individual citizens for renewables. In the US, the government regulates private utilities to prevent price gouging; in return, the utilities are guaranteed a certain profit margin. Is this a free market?

The author also mistakenly assesses the German wind market: "However, since wind has been installed in almost all available sites, there is not much prospect for installing new capacity," which does not explain why Germany has continued to install at the same level since at least 2007 (see chart).

It is hard to imagine how any market would operate in an environment where the government requires utilities to use a minimum amount of renewable energy and at the same time requires them to purchase all the renewable energy produced at higher-than-market fixed prices.

Why is that hard to imagine when there are so many examples? Why doesn't he take a look at Germany?

And then there is the argument about the "net effect" of jobs, which the Michigan White Paper got from Prof. Calzada and I debunked in my own special way here.

In the end, the Michigan White paper is right about one thing:

He concludes that, were Michigan to implement the kind of policies that Germany has, "cooperative members’ [i.e., his customers] annual costs could increase by nearly 50% [by 2020]."

Well, Michigan, I suggest you follow his advice, stick to free-market mechanisms, and not fall for even more European socialist policy. Detroit is doing just fine right now by responding to the market without government intervention.
Posted by petiteplanete at Thursday, August 06, 2009