All too rarely, someone comes along with an idea whose simplicity seems to cut right through the complexity of an issue with the ease of Occam's razor. A new report (PDF) entitled "Study on the effects on employment of public aid to renewable energy sources" by a team of researchers headed by Prof. Gabriel Calzada Álvarez at the Universidad Rey Juan Carlos has just done such a thing -- they have found a simple formula proving that for each of these "green" jobs created, 2.2 jobs are lost.

But before we get to the formula, we should discuss the general context a bit -- and as someone who does not know much about the Spanish energy market and does not speak Spanish, I am grateful to Prof. Álvarez et al. for his accurate and detailed explanations.

As some of you may already know, Spain put a ceiling on its subsidies for solar at the end of September 2008 because, as everyone agrees, the situation was getting completely out of hand. As the study puts it:

Even with subsidy schemes leaving the mean sale price of electricity generated from solar photovoltaic power 7 times higher than the mean price of the pool, solar failed even to reach 1% of Spain’s total electricity production in 2008.

But solar is already a problem in Spain. "Renewable technologies remained the beneficiaries of new credit while others began to struggle," the study's authors write, adding that "electricity retailers are forced to buy all the ['green'] electricity." You need look no further than the recently published annual reports of some of Spain's biggest electricity firms to see how detrimentally impacted they were. For example, the Red Eléctrica Group’s profits only rose by 17.7% in 2008, and Endesa posted a measly profit of €7.17 billion in fiscal 2008 (PDF).

Solar is not the only problem -- Spain has been throwing money at wind, but as the authors put it:

The rate of development of this technology has remained comparatively quite calm.

("The wind is calm" - get it? Ah, that Spanish humor...) The authors don't provide any figures, but if we take the following chart from the US Energy Information Administration, we see that the price of a kilowatt-hour of electricity from a wind turbine may have fallen by around 90 percent from 1980 to 1990 and by roughly another 50 percent from 1990 to 2000, but it has hardly changed since, while prices for conventional energy skyrocket: 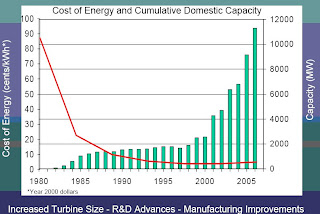 Energy providers are not the only ones detrimentally affected; energy-intensive industry also is. The authors use an excellent example to prove their point: Acerinox. This Spanish firm is one of the largest metallurgy companies in the world. It is exactly the kind of firm you want to have next door: a responsible member of the community that would never accept subsidies itself. Of course, the usual Birkenstock-wearing, muesli-masticating opponents of progress will complain that Acerinox has moved not only to the US state of Kentucky and Middleburg, South Africa (note: I did actually find one mistake in the study -- the authors speak of "Columbia (South Africa)", which does not exist, but you're allowed one mistake over 51 pages, right?), but also to Iskandar Malaysia, one of those free-trade zones that allow global corporations to escape national taxation of all sorts. The website of Iskandar Malaysia even lists the incentives unabashedly:

But to be fair, the website also makes it clear that the new commercial zone is not just about business: "Recognising the need for sustainable development, social and environmental issues features heavily on its agenda." The private sector is also involved, as this real estate site from Johor (the very place that Acerinox is relocating to) clearly illustrates:

One of Iskandar Malaysia’s major (although perhaps less known) goals is to create liveable communities that encompass quality housing, adequate facilities, quality services and a healthy, safe and lively environment.

The project is the pride of the Malaysian business and political community because of this very unique combination of commercial interests, environmental respect, and social prosperity for all. As none other than former Malaysian Prime Minister Mahathir Mohamad put it:

After the land is sold, the Malays will be driven to live at the edge of the forest and even in the forest itself… In the end, the area in Iskandar Malaysia will be filled with Singaporeans and populated with only 15 percent Malays.

So you see, Acerinox is not trying to evade general European tax law and exploit the natural and human resources of emerging nations; rather, as the Spanish report finally makes clear, Acerinox is trying desperately to escape draconian hikes in energy prices due to subsidies for renewables (except for those price hikes before 2002, which an Acerinox exec in the study specifically complains about - those were before Spain went crazy with renewables and must have some other cause, like skyrocketing conventional energy prices), and the firm has chosen a socially and environmentally responsible tax-free zone in doing so.

Let us return now to the real breakthrough in the study: the simplicity of the argument. Before the authors get to the magic formula, which will probably go down in history as the E = mc2 of the 21st century, they foreground it thus:

… These schemes create a bubble, which is boosted as soon as investors find in “renewables” one of the few profitable sectors while when fleeing other investments.

It is important to note that the authors repeatedly place the word "renewable" in quotation marks -- after all, how can anything be renewable when it costs so much? But the real breakthrough begins when the authors show us how investments in renewables drain investments from other sectors:

… if the government decides to spend taxpayer money on windmills or solar panels, their unseen cost would be all the hamburgers not cooked or any other productive activity that would no longer take place as a result of the state directing resources to windmills or solar panels. Policymakers must recognize that because of government action, other jobs are not created.

Hamburgers! It was here that I began to suspect genius afoot. Since mid-2007, I have probably spent four or five months in Spain, and I can attest that fast food joints are notoriously full there. But it never occurred to me that investments in renewables were one reason why Spain doesn't have more greasy spoons. Probably because I am not able to cut to the quick like a lone team of Spanish economists north of la Mancha, I foolishly assumed that investments in renewables were offsetting investments in other forms of energy, but now I see that any investment binds capital that could be used anywhere.

At this point, is almost too bad that you are reading this blog instead of reading the study first, so if you want to switch now, just click here. The experience is worth it, for the simplicity I have briefly presented is expounded upon in much greater detail in the study, so by the time you get to the formula, the experience is almost religious -- here it is:

I'll admit that it is a bit longer than E = mc2, but the more you look at it, the more you recognize its simplistic beauty. The formula surely deserves a Nobel Prize for cutting out all kinds of real-world factors and getting to the indisputable fact that, over the past few years, the capital invested in each "green" job in Spain could have produced 2.2 jobs elsewhere. And that's not all: other countries can apply this simplistic formula to their own data and probably come up with similar figures, such as 1.8 or 2.8. Newspapers can reprint these easy-to-understand figures, and everyone will realize what a sham "renewable" energy is.

Of course, skeptics will still argue that there is no guarantee that the money not invested in renewables will stay within Spain. The EU itself, complicated thinkers will argue, estimates (PDF) that Spain imports nearly 80 percent of its total energy consumption; it follows, smart-aleck know-it-alls will opine, that 20% of 2.2 jobs is 0.44 jobs - far less than the one “green” job created. But these people miss the point -- such considerations are completely extraneous to the breakthrough simplistic formula above! This money could be used in any sector!

Sure, the usual coterie of card-carrying Greenpeace supporters will probably still joke that you will need to have 2.2 jobs flipping burgers for rich German engineers on vacation in Spain if you want to make as much money as one Spanish solar contractor, but let them laugh -- we know better. Spain is a powerhouse of innovation, and Spanish industry does not need to be told what to do with investment capital. Like the US, Spain can be trusted not to create frivolous bubbles on real estate markets - Spain does not have the highest unemployment in Europe right now because it can't be trusted with money. The only bubble in Spain was the “renewable” one!

Spain does not depend on the excess cash of tourists from innovative northern European countries. Why, tourism only makes up 11 percent of Spain’s GDP. That leaves 89% for innovations that need capital! Ask any German on vacation in Spain, and they will tell you they are not down there because of good weather -- it's all economic espionage!

Of course, as simplistic as the formula above is, there are still aspects that escape me. For instance, if the Spanish already have enough to eat, why do we need to invest in hamburger joints? What about those sides of cattle hanging in Spanish bars and truck stops? And are the authors of the study, who are obviously very concerned about domestic job creation with government funding, also upset about the decades of cohesion funding from the EU to Spain? According to one estimate, Spain was the net recipient of more than 48 billion in funds from the EU for infrastructure projects from 2000-2006, and that funding is set to continue until 2013 even though Spain has reached a level of prosperity that disqualifies it from being a net recipient (PDF). The Spanish government managed to get this extension nonetheless a few years back -- isn't that outrageous? I mean, of all countries, Spain can do without such "help", thank you very much.

In closing, I should mention that the study, which is written in excellent English, seems to address a US audience by repeatedly mentioning President Obama's plans to invest state funding in "renewable" energy. The authors think the timing couldn't be worse:

The regulator should consider whether citizens and companies need expensive and inefficient energy – a factor of production usable in virtually every human project - or affordable energy to help overcome the economic crisis instead.

Indeed, we should wait until renewables become competitive before throwing all this money at them. Thank goodness for this study!

(Disclaimer: Germany will be happy to get those prices for renewable energy down for you. And if you live in one of those sunny, windy places like Spain or the US, you may one day realize that sunlight and wind are free, but the equipment is expensive -- but it will be too late. The manufacturing capacity will be in Germany, and you will be importing expensive equipment. But I live in Germany, so I'm happy either way.)

Posted by petiteplanete at Thursday, April 16, 2009